Foreign students at the Narita campus of the International University of Health and Welfare. Since its launch in April 2017, the university has accepted 40 foreign students from nearly 10 Asian countries and regions.

TOKYO -- Cracking Japan's rigid medical system is not a task for the meek.

A new medical school had not opened in Japan since 1979 until last year when one broke a 38-year hiatus. That new school, founded by a prominent hospital chain operator and an outspoken critic of the nation's vested interests and red tape in the medical system, is now actively scouting students fro m across Asia with an ambitious goal: becoming an Asian medical hub.

Since its launch in April 2017, the International University of Health and Welfare, or IUHW, has accepted 40 foreign students from nearly 10 Asian countries and regions, including China, Vietnam, Indonesia, Myanmar and Mongolia.

The private, for-profit university also has 240 Japanese students. A university official said the percentage of female students at IUHW is over 40%, indicating that women may have a greater willingness to work abroad.

At the campus in the city of Narita, located 50 km east of central Tokyo and in the vicinity of Narita International Airport, a multinational team of about 30 students play a role in a mock medical interview. "Could you tell me more about your chest pain?" a student from Indonesia asked her Japanese classmate.

Almost all classes here are offered in English, which avoids the language barrier for the foreign students while exposing the Japanese students to a much-needed global environment. The courses, at the same time, equip foreign students -- mostly from developing Asian countries -- with Japan's advanced medical skills.

Eighteen-year old student May Pyae Kyaw from Myanmar is one. "There are only 13 brain surgeons in our country. So I want to become one," she said with a gleam in her eyes. 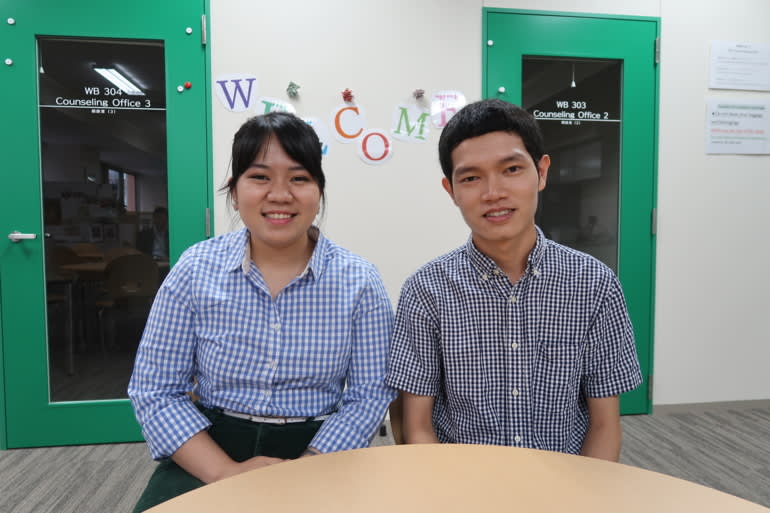 May Pyae Kyaw, left, of Myanmar and Kong Borey of Cambodia are students at the International University of Health and Welfare. They hope to contribute to the improvement of medical care in their countries. (Photo by Akihide Anzai)

May was a freshman at a medical university in Yangon when IUHW held a session there to invit e students to Japan. She arrived last year. It was an opportunity she did not want to miss. "I hope to acquire Japan's cutting-edge medical practices, because Myanmar's medical standards lag those of other Southeast Asian countries," she said.

Cambodian student Kong Borey had the same aspiration when he transferred from a medical school in Phnom Penh. "I wish to contribute to the developing medical standards of my country," he said.

Both May and Kong were granted scholarships from IUHW that covers school fees and living expenses for six years -- 30 million yen (about $270,000) each.

The condition for the grant: working at IUHW's affiliated hospitals in Japan and their own countries for nine years after graduation. From the university's perspective, the scholarship is a way to train doctors who will work for its hospital network, which it plans to expand across Asia. IUHW has already established many affiliations with medical universities in developing Asian countries.

At Mongolian National University of Medical Sciences, for example, the international relations and cooperation director, Enkhtuya Vankhuu, said the affiliation not only offers Mongolian students with advanced medical knowledge but also with real-world clinical training.

"In Mongolia, medical schools and hospitals are quite distant because they have different regulatory agencies," Enkhtuya said. "I hope our students get more practical experience and know-how at IUHW," where students are given on-the-job training at hospitals, she added.

IUHW also counts on its Japanese students to contribute to its overseas expansion. To equip both Japanese and foreign students with international awareness, the school requires final-year students to take part in a month-long clinical training program in Asia, the U.S. or Europe.

To lure Japanese students who will play important roles in the hospital's oversea s expansion, IUHW offers tuition that is significantly lower than its peers. The tuition for the minimum six years, entrance fee included, is 18.5 million yen, or about 40% lower than the average costs for private medical schools in Japan. The tuition is largely subsidized by the profit the hospital chain earns, school officials said. The medical school of the International University of Health and Welfare in the city of Narita.

The first step of the school's overseas expansion will come as early as mid-September, when it opens a medical physical checkup center in Ho Chi Minh City in collaboration with Cho Ray Hospital, one of Vietnam's largest medical institutions.

IUHW wil l send Japanese doctors to Cho Ray, a new advanced medical facility where it aims to attract wealthy patients from across Southeast Asia. Although details have not yet been disclosed, many other Asian medical institutions have offered to join up with IUHW, officials said.

Leading the overseas expansion plan is Kuninori Takagi, the 60-year-old chairman of IUHW and the Fukuoka-based hospital group Kouhoukai. A doctor himself, Takagi is a well-known and prominent figure in Japan's medical circles, particularly for breaking taboos in the nation's close-knit medical community and calling for the end of stringent regulations that protect vested interests.

Japan's rigid medical community currently is embroiled in a pair of scandals at Tokyo Medical University. The private school allegedly began lowering test scores of women applicants several years ago, when the number of admitted female students started to increase. The practice, reported earlier this month, was intended to limit the number of women doctors at its own university hospital, as women are seen as more likely to take leave or resign to give birth or raise children.

That follows a bribery scandal in July, when top officials of Tokyo Medical University were indicted on graft charges related to the education ministry's support program for private universities.

For Takagi, himself a graduate of Tokyo Medical University, opening a medical school at IUHW was a thorny path. The Japan Medical Association, a lobby group that has the strongest political clout among its peers, had consistently objected to the idea of having a new medical school.

The association has said that existing medical schools already have increased their admission quotas. It has also said that if a new medical school is established, it would be hard to control the number of doctors in declining population.

Takagi took the first step at opening a new medical school in 2007, when he set u p a task force committee and started coordinating with concerned parties. But strong opposition on all fronts delayed the approval procedure for years until he decided to resort to legal procedures in 2013.

"We have no choice but to litigate," Takagi said at the time, as he prepared with his lawyers to take the matter to court. "Japan's constitution ensures freedom of education, and there are very few developed countries that do not allow the new entry of a medical school," he said.

But unexpectedly, Takagi suddenly found a life-saver. He had heard that the government -- which had been wanting to increase the competitiveness of Japan's medical system -- was looking for institutions that would break the country's hidebound regulations and spearhead the move toward deregulation.

Kuninori Takagi, chairman of the International University of Health and Welfare.

Takagi was quick to jump on the effort, and he submitted a plan to open a medical school in the national strategic special zone in Narita City -- a city planning to brand itself as an "international medical city" under the government's deregulation initiative.

"During the assessment procedure, the government demanded us to have a certain number of faculties and to maintain a constant level of education, so I pledged we would significantly exceed the requirements," he said.

Takagi enthusiastically traveled across Japan and around the world to scout prominent professors, such as Japanese-born Haruko Akatsu, then a clinical associate professor of the medical school at Stanford University, who eventually became the dean at the new ly founded IUHW.

It was the first medical school to open in Japan in 38 years with the exception of Tohoku Medical and Pharmaceutical University in Sendai city, about 350 km north of Tokyo. That facility was permitted as part of the special reconstruction project following the devastating March 11, 2011, earthquake and tsunami.

But Takagi's ambitions did not stop there. To ensure the momentum of his success, he quickly shifted his focus to the Asian expansion plan. He had a track record: Takagi expanded a family-run local hospital into a medical group that together has 40 hospitals, nursing facilities and other medical institutions. He continues to run the group.

Takagi lifted Sanno hospital in Tokyo out of its financial problems, focusing on private and luxury rooms much like a hotel and luring the wealthy class. But while his international vision is firm, his vocal pronouncements against the country's medical system -- he has said hospitals that are not competitive should be bankrupt -- has landed him in hot water.

"Whatever I do, I'm always criticized. I'm rarely praised, even when I am doing good things," Takagi said, laughing.

For Takagi, adversary is an advantage. That is why Japan's declining population became an impetus for him to expand abroad. And he is taking advantage of IUHW's location in Narita. Capitalizing on the close proximity to the international gateway airport, IUHW will open a new hospital there in 2020 with as many as 640 beds to accommodate patients arriving for medical tourism. He sees the 2020 Tokyo Olympic Games as a huge opportunity to expand his operation.

The new hospital has equipment to remotely conduct medical examinations for patients at foreign hospitals, and the staff speaks 10 languages. It also has religious facilities to serve patients from across Asia.

"We also focus on removing language and cultural barriers, and we hope to build an u nparalleled hospital to become an Asian hub," Takagi said.

An island off the coast of Japan disappeared into the ocean, but hardly anyone noticed for quite some time

An island off the coast of Japan disappeared into the ocean, but hardly anyone noticed for quite some time Esanbe Hanakita Kojima, a small...